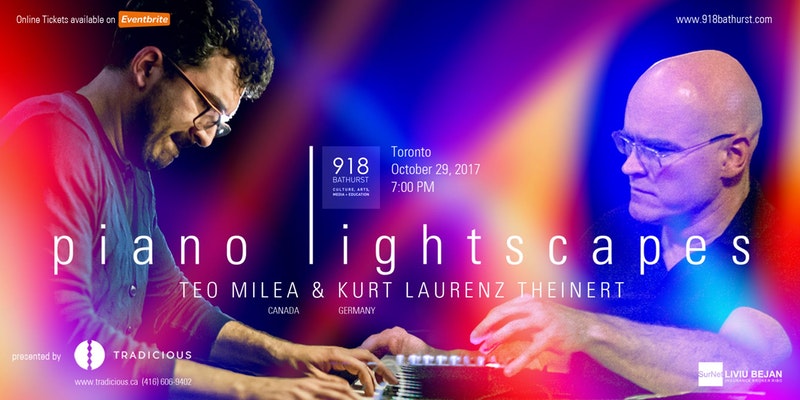 The fascinating and catchy notes of Teo Milea’s compositions meet the fantastic lightscapes of Kurt Laurenz Theinert and the result is magical.

Do not miss this unique chance to step into a mesmerizing, wonderful world for the senses. Come to experience colors, shapes, and fantastic dancing visual effects embracing the beautiful piano melodies.

Teo Milea is a Toronto-based classical/crossover pianist and composer whose unique musical style speaks to the public in a cinematic way.

Teo Milea collaborated with The Opera of Vienna (Austria), he is the first pianist in the world invited to play his own music at the NATO headquarters (Brussels, Belgium) and even more, the first pianist to mount on the stage of The International Ballet Festival (Dortmund, Germany), interpreting his work.

Among his latest achievements, Teo Milea was the first solo piano artist to reach the Top 4 of the Searchlight 2016 contest on CBC Music Canada and the winner of the Popular Vote with his solo piano song ‘Irreversible’. He was also selected to give the Postludes performance after Ludovico Einaudi`s concert at the Koerner Hall, in Toronto.

Discovering Teo Milea`s music is love at first note. When you listen to his music, you`ll realize you have been listening to the perfect soundtrack of your life.

“Some very talented people can construct pseudo-narratives from music itself. Teo Milea has the rare ability to do all this with only the use of his piano… Milea has enough talent in him to become not only one of the next great piano players, but composers, too”.

Kurt Laurenz Theinert is a photographer and live performing light and media artist.

His „visual piano“ performances are shown all around the world in Sao Paulo, London, Sydney, Berlin, New York and Singapore.

With the aid of software developers Roland Blach and Philipp Rahlenbeck, he has created an ‘image instrument’ (visual piano) on a MIDI-keyboard basis, that allows him to translate his artistic intentions into live performances while configuring time with light.

He creates pure visual music – live, abstract and space filling by using 360° panorama projection. There is no technical link between sound and image to enable a spontaneous dialogue between him and the musician. In his compositions and improvisations, he pries open the static properties of his projection spaces in favour of only those spatial correlations that can be perceived in the dynamics.