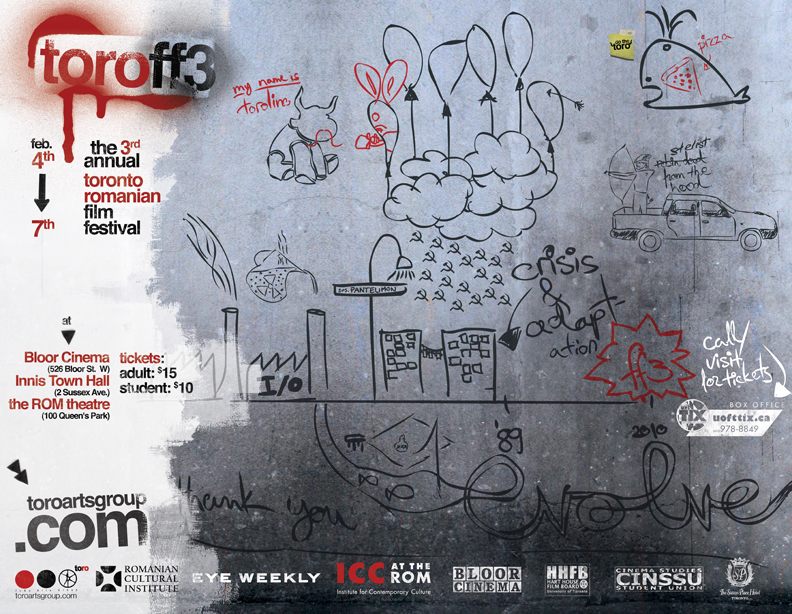 Scheduled to transpire between February 4th and 7th and curated by the ToRo Arts Group (with the support of, and in collaboration with, the Romanian Cultural Institute), the Third Annual Toronto-Romanian Film Festivalwill explore the intricacies, modes and relational realities of adaptation, as they manifest themselves socially, politically and economically.

A Panel Discussion, preceded by the screening of French-produced La Nouvelle Vague Roumaine and moderated by Calin-Andrei Mihailescu, a Professor of Comparative Literature at the University of Western Ontario, will take place on February 4th; this free event will be held at the Royal Ontario Museum. Film critics Jennie Punter and Adam Nayman, along with director and producer Tudor Giurgiu, will explore the current international status (and history) of contemporary Romanian cinema.

Cristian Mungiuʼs Tales From The Golden Age, an Official Selection at the 2009 Cannes International Film Festival, will open the festival.

Saturday, entitled Doc.Day, will include Harun Farocki and Andrei Ujicaʼs Videograms of a Revolution, a ﬁlm-essay about the ’89 revolution that was voted by the Cahiers du Cinema as “one of the most subversive ﬁlms of all time,” and Tudor Giurgiuʼs reminder, in the form of Weddings, Musics and Videotapes, that, as purveyors of a well-executed wedding, Romanians may have arguably – and perhaps inadvertently – become the continentʼs most proliﬁc consumers of unmitigated distractions. Augmenting the aforementioned will be Andrei Dascalescu’s winner of the 2008 IDFA Award for Best First Appearance, Constantin and Elena, a ﬁlm that chronicles a coupleʼs unrepentant love story that transcends both the implacability of time, as well as the intransigent conventions of ʻconcepts imagined.ʼ

The Sunday program will feature Radu Munteanʼs 2006 Locarno Golden Leopard nominee,
and Alexandru Solomonʼs Apocalypse on Wheels, a documentary not about ʻhow the roads or the cars look like,ʼ but rather about the transformative effects of – and being in – automotive trafﬁc. Sunday will culminate with the screening of Tudor Giurgiuʼs Katalin Varga, winner of the Silver Berlin Bear at the 2009 Berlin International Film Festival and the 2009 European Film Academyʼs European Discovery Award.

Tudor Giurgiu, Andrei Dascalescu and Hanno Höfer are Festival invitees and will be in attendance to answer questions following their respective films.

As in the past, an opening night party will take place on Friday, subsequent to the Tales From the Golden Age screening, the details of which are to be announced on the ToRo Arts Group website.

The Film Festival screenings will be held at both the Bloor Cinema (bloorcinema.com), as well as at the Innis College Town Hall, (utoronto.ca/townhall), located at 506 Bloor Street West and 2 Sussex Avenue, respectively.

General admission tickets, priced at 15 dollars for adults and 10 dollars for students with valid student identiﬁcation, as well as day and festival passes, will be available for purchase either at the UofT Tix box ofﬁce, located at 7 Hart House Circle, by visiting the UofT Tix website, at www.uofttix.ca, or by calling the box ofﬁce directly at 416-978-8849.

PLEASE CLICK HERE FOR ADDITIONAL INFORMATION AND A FULL PROGRAM LISTING; All general and ﬁlm festival inquiries should be sent to office@toroartsgroup.com.