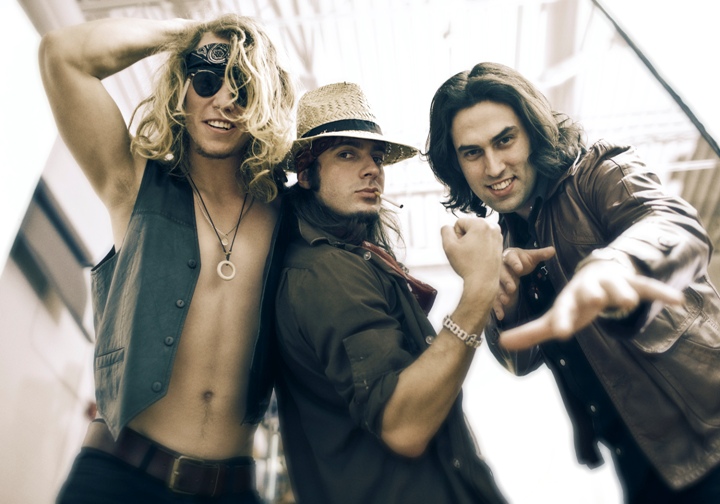 Consisting of Adrian Tonceanu (Vocals/Guitars), Igor Lazebnik (Vocals/Guitars), Tyler Koch (Drums/Backup Vocals) and Tim Young (Bass/Backup Vocals), Morre was born in early 2008 in Toronto by the common thirst of creating an original yet commercial sound. This band has a unique story behind its upbringing. Traveling from different parts of the world, each member endured hardships as artists, as well as the joys of meeting new characters throughout their journeys. These elements give the band endless topics and weight to their lyrical and musical content. Combining dark, mystical themes with camp-fire party vibe, this band will trigger a wide range of emotions in their listeners.

With a deeply rooted musical knowledge these three rockers managed to craft an elaborate yet easily digestible sound of their own. Morre’s style and music can be described as a “world sound” combining two great songs of our time: “Paint it black” (Rolling Stones) and “Kashmir” (Led Zeppelin). In their sound you can also hear hints of Pink Floyd and eastern melodies.

By performing at several venues in Toronto and throughout Ontario, the band managed to catch the attention of various labels in the early stages of their existence as well as attracting audiences of all age groups. As a result the band got signed to USA based label “Melodic Revolution Records” in January of 2011.

With a powerful live delivery reinforced by conviction and strong dynamics, Morre keeps the audience in the palm of their hands. Every show has a theatrical element that makes the band a visual, entertaining outfit. Conducted by professional behaviour and charisma on stage as well as off stage, Morre treats their audience with class and respect making everyone an ally. The cunning ability to adapt to the industry’s standards, the flexible nature and the versatility of this group can only make this an easy project to work with.

One of the many unique characteristics of the band is defined by a Queen-esque ability to all sing in harmony. The two distinct sounding guitar players (Igor and Adrian) give the band a panned stereo flavour that will make you bend back and forth between the left and right speakers of your stereo system. Tyler’s diverse drumming and ability to personalize each song is an integral part of the overall sound. Combining a Ginger Baker/Keith Moon stage persona and style, Tyler is hardly the guy at the back, sharing the spotlight.
The recent addition of Tim Young on bass strengthens the bands rhythm section. Tim has an impressive resume for such a young musician, performing with Queen, Gypsy Kings and numerous European pop stars throughout the mid 2000’s.

Their two records “…Out There” and “Contrast” released in 2010 and 2011 are selling consistently throughout the world, gaining highly acclaimed reviews in North America, Europe and Australia. The albums were featured on many radio shows throughout the above mentioned continents touching a wide demographic range. These albums established Morre as an original sounding band and carved a unique path that can be recognized from the first seconds of any of their songs.

In 2011 Morre toured Europe successfully for two and half months playing in 12 countries over 33 concerts as well as taking part of radio shows and interviews for magazines. Upon their return to North America they also played in USA part of the Clinton Arts and Music Festival sharing the stage with many great artists.

Currently the band is working on their 3rd record entitled “Morphine” with the deadline set for April 2012. Morre will tour Europe again in 2012 for over three and a half months in the summer/fall of 2012 with the aim of performing in 15 countries.