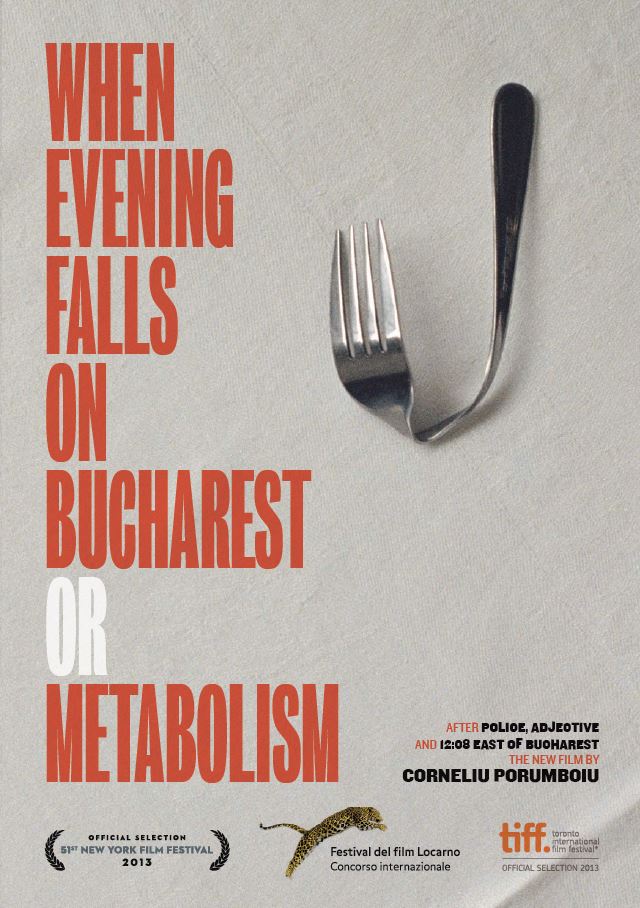 A director (Bogdan Dumitrache) with two weeks left on his latest film fakes an ulcer in order to delay production and pursue a romance with his lead actress and muse (Diana Avramut). In the hands of Romanian fimmaker Corneliu Porumboiu, this seemingly simple love story becomes a force of cinematic deconstruction similar to his meta police procedural, Police, Adjective.

When Evening Falls on Bucharest or Metabolism could be a simple story of a romance between a director and his lead actress. Yet in the hands of Romanian director Corneliu Porumboiu, it becomes an intermediary force of cinematic deconstruction that is sure to provide more food for thought for audiences familiar with Porumboiu’s meta police procedural, Police, Adjective.

Paul (Bogdan Dumitrache, who also appears at the Festival in Child’s Pose) has two weeks left of shooting his latest film — and pursuing a romance with his actress and muse, Alina (Diana Avramut). Faking an ulcer in order to delay the production, Paul spends his downtime with Alina going to restaurants, discussing and deconstructing banal topics. The quasi-absurdity of their analytical relationship moves from the dining room to his apartment, where they exhaustively rehearse her final scene in an attempt to draw out its dramatic authenticity. Through these moments, Porumboiu sharpens his skill for elevating the mundane to the metaphysical.

Testament to the New Romanian Cinema’s continued interest in exploring the relationships between reality, cinema, and truth, Porumboiu’s directorial evolution becomes evident in the way he reduces cinema to its simplest form. Employing an acute sense of framing and awareness of time, Dumitrache and Avramut’s performances are blended with the mise en scène, and shot with natural beauty by Tudor Mircea. Dense with meaning in every frame, When Evening Falls on Bucharest or Metabolism delivers a thought-provoking rumination on our engagement with reality through cinema.

Corneliu Porumboiu was born in Vaslui, Romania, and studied directing at the National University of Drama and Film in Bucharest. His features include 12:08 East of Bucharest (06), which won the Caméra d’Or at Cannes, Police, Adjective (09), which played at the Festival, and When Evening Falls on Bucharest or Metabolism (13).