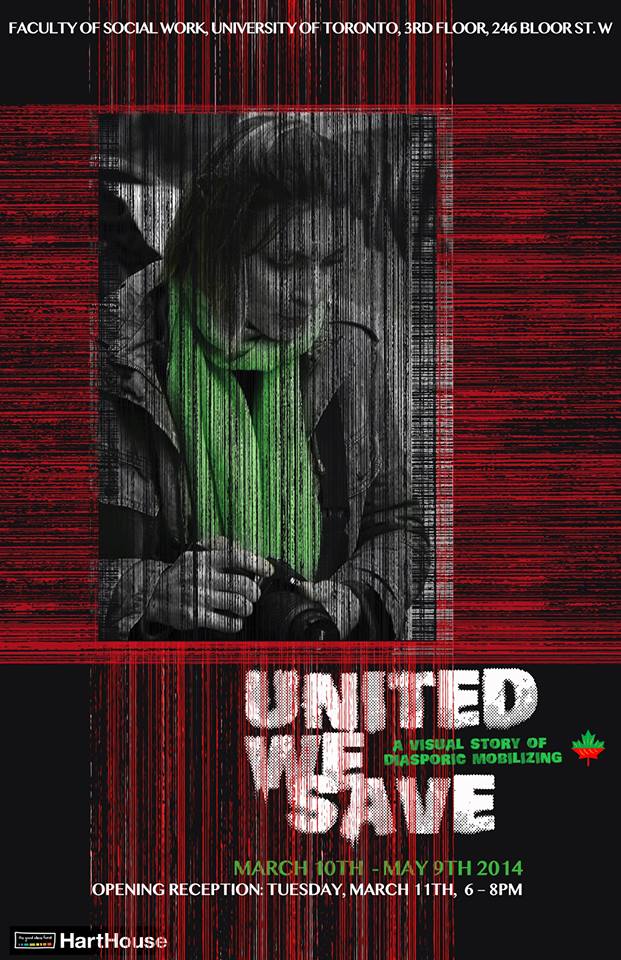 Canada Save Rosia presents “United We Save:  A Visual Story of Diasporic Mobilizing” photo exhibit at the Faculty of Social Work, UofT, from March 10th to May 9th. Opening reception is on March 11th from 6-8 pm.

UNITED WE SAVE photo exhibit visually documents four months (September -December) of Toronto based diasporic mobilizing in solidarity with the Roșia Montană global campaign. Roșia Montană is Romania’s oldest mining settlement (thought out to have 1882 years) covering an area of 550 km2 within the Transylvanian mountains of Apuseni. Despite its remote location, Roșia Montană gained much public momentum within the last several months, due to local and global uprisings fighting against an open pit gold mining project pursued by the Canadian corporation Gabriel Resources Ltd. (GBU).

The Toronto based movement gathered a group of Romanian-Canadians and allies opposing the project, as they mobilized in solidarity with similar crowds from Romania and abroad. After four months of mobilizing, the draft bill allowing GBU to start the Roșia Montană project was rejected by the Romanian Senate in November 19th 2013, with amendments to the country’s mining law being further voted down by the Parliament on December 10th 2013.

Exclusively presenting imagery from Toronto’s movement, the UNITED WE SAVE photo exhibit is a form of protest in itself. It aims to politicize spectatorship by shedding light on the Roșia Montană issue and by re-imagining the utopian branded notions of mobilising as possible forms of successful citizenry and political engagement.

Images were captured by protestors themselves. Some shots were simply taken with iPhones while others were professionally casted. Printed on canvas via heat transfers sheets and accompanied by a short narration, the imagery gets re-created to closely and stylistically resemble protest banners.Photographs are represented in a black and white scheme with dispersed patches of red and green, as to reflect the chromatic symbolistic of the Roșia Montana campaign.

UNITED WE SAVE exhibit aims to bring narrativity to protest based imagery. To translate the image into the story, by way of telling the very same story through the image. Following a relational aesthetic, it moves the narration from hyper-individualism to hyper-collectivism, by representing portraits as collectively constructed individual images, in order to draw attention on public ability to collectively change societies.