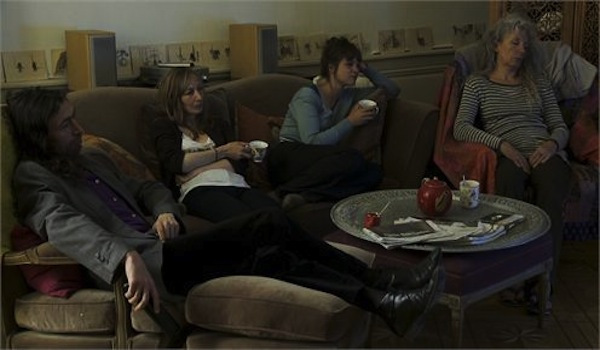 One of the year’s most unexpected and delightful surprises was never meant to be seen by an audience. Trois exercises d’interprétation grew out of an intensive three-week acting workshop conducted in Toulouse in 2011 by acclaimed Romanian director Cristi Puiu (The Death of Mr. Lazarescu, Aurora) under the auspices of Les Chantiers Nomades, a French centre for artistic research in performing arts and the cinema. Reconfiguring Russian philosopher Vladimir Solovyov’s Three Conversations and A Short Story about the Antichrist into a contemporary idiom, Puiu encouraged his actors to extemporize while ensuring the original sense of the text. The result is a deeply intelligent, wryly amusing and compulsively watchable cinematic treatise worthy of Éric Rohmer.

Each exercise comprises a deftly improvised encounter among four different characters. In The Mouse is Under the Table, an academic drags an old childhood friend, with whom he has been recently reunited, to a lunch with a bourgeois couple, where preconceptions about gender and class soon come tensely to the fore and intellectual pretense, bigotry, homoerotic suggestion and Christian strictures are all par for the course.

The Cat is on the Chair convenes another quartet for another repast, where the conversation steers from the relevance of faith and political pacifism to a sly in-joke about art-house cinema pretension (Apichatwho?). The Monkey is on the Branch is an all-girls shindig tackling love, life and death, which culminates in a final séance in which all of the film’s characters come together and face their fears.

Puiu is one of today’s most visionary filmmakers, and it’s no wonder that he succeeds in transforming this seemingly simple exercise into a manifesto — one that not only suggests alternate ways to make art, but new ways to grapple with the uncertainly that rules our lives.

Cristi Puiu was born in Bucharest and studied painting at the École Supérieure d’Arts Visuels in Geneva. He directed his first short, Stuff and Dough (01) after returning to Romania. His Cigarettes and Coffee (04) won the Golden Bear for best short at the Berlin International Film Festival. His other films are The Death of Mr. Lazarescu (05), which played the Festival and won the Un Certain Regard prize at Cannes, Aurora (10), and Trois exercises d’interprétation (13).