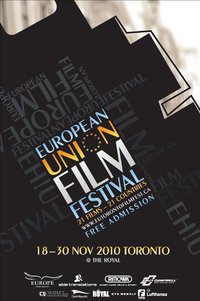 Synopsis
Loosely based on actual events, The Rest is Silence tells the story of an ambitious director and a financial tycoon who dream of bringing a realistic depiction of Romania’s Independence War of 1877 to the big screen. Grigore is a co-director at Bucharest’s National Theatre in 1911 who is obsessed with making “the longest film ever produced” and joins a film academy run by the wealthy Leon. The latter steals a movie idea from a French company. After post-production in Paris, Leon is appalled by the length of the movie, claiming it is unmarketable. Only Grigore believes in the lasting value of the film, though it takes him five years to get his revenge.

Join us for the 6th edition of the European Union Film Festival, organized by the E.U. Consulates, Embassies and Cultural Institutions in Toronto.

All screenings will be free admission, exclusively held at The Royal in Little Italy.