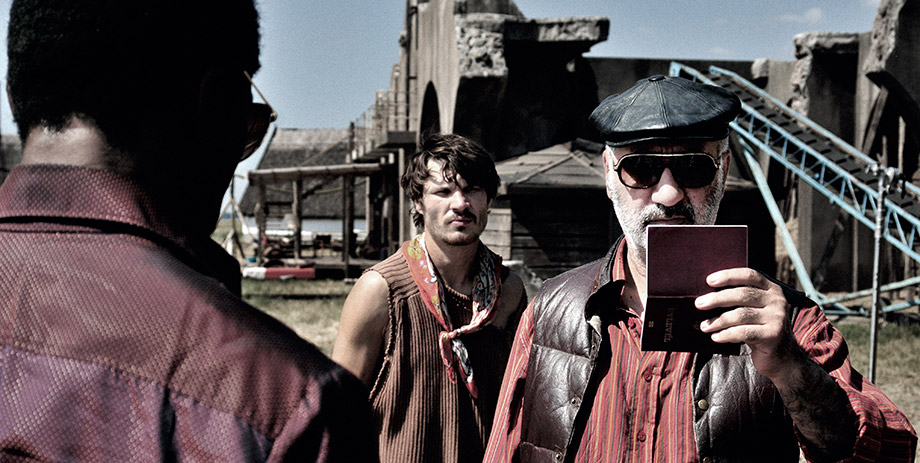 A mysterious wanderer (Isaach De Bankolé) settles into a strange homestead on the parched Hungarian plains populated by an odd assortment of outcasts, in this stunning, dreamlike reverie from ambitious director Szabolcs Hajdu.

This strange, hallucinatory film from Hungarian iconoclast Szabolcs Hajdu is a curious and spellbinding mix of elements. Set against the parched landscape of the Hungarian plain, Mirage mixes elements of the western with nods to Miklós Jancsó’s stunning films of the sixties, but also creates its own singular hybrid.

Mirage begins — and continues — for long sequences in almost complete silence as a black man walks across an interminable prairie. He stumbles into an abandoned train station, waits, encounters a local, and continues on his way. Eventually arriving at a newly built “homestead” that looks like a ranch in the American Midwest (but is apparently in the middle of nowhere), Francis settles in with an odd assortment of outcasts and cowboys. Why he is there, what he is doing, and who these people are remains a mystery. A Frenchman rolls up, a football starts to figure in the plot, and the narrative thickens until violence starts to flicker around its edges.

Hajdu, one of the few truly personal voices left in contemporary Hungarian cinema after the retirement of Bela Tarr, filters his view on his country through fable and association. Mirage is mysterious, dreamlike, at times almost surreal. In its own subtle way it is a story about racism, equality, and dictatorship that sees Hajdu returning to the themes of repression and exploitation explored in his last two films, White Palms and Bibliothèque Pascal. Isaach de Bankolé contributes to the deliberately unsettled atmosphere in his role as the protagonist: incongruous, alien, and finally disruptive.

Like Janscó’s celluloid masterpieces of human movement in landscape, Mirage shoots beautiful images of people against the parched Hungarian plains.

More information at www.tiff.net/festivals/thefestival or 416.599.TIFF